Redstone is one of the most unique components in Minecraft free. Minecraft Redstone has allowed enthusiasts to create something as basic as a TNT Cannon, to create literal computers in Minecraft. In a game that allows players to use their imagination to reach their creativity limit, adding the Redstone aspect to Minecraft is like icing on the cake. 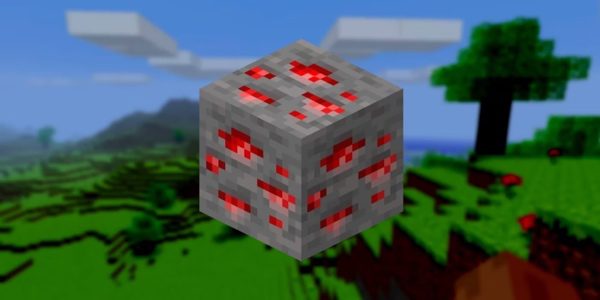 What is Minecraft Redstone

Minecraft Redstone is a relatively tricky item to find in Minecraft, as it can only be found deep in caves or digging deep underground. When you find a Redstone Ore, you will need to use an Iron Pickaxe or higher to gain the material from the ore. Each Redstone Ore will break into 4–5 Redstone dust or more with Fortune (6 Redstone Dust with Fortune level 3) and can be stacked in multiples of 64 Redstone Dust. While breaking the ore, the Redstone will light up.

Once you have gathered a decent amount of Redstone dust, you can start to use it as your power source and create other Redstone items in the game. Though you should be careful, just like electricity does not like water, Redstone will break into floating items once any water runs over the contraption. In general, opaque blocks (i.e. blocks you can’t see through) can be powered by Redstone; transparent and non-solid blocks can not. 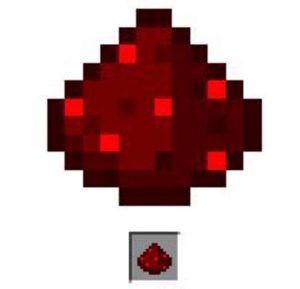 Redstone Dust appears when breaking a Redstone Ore. Each ore can provide from 4 to 6 Redstone Dust. This allows the player to link 2 contraptions together at a maximum distance of 15 blocks. After 15 blocks, if the Redstone dust placed down is active will no longer be alive and will slowly lose color, becoming darker Red. Redstone Dust is what you will need to make Redstone circuits.

How to Make a Redstone Repeater in Minecraft? 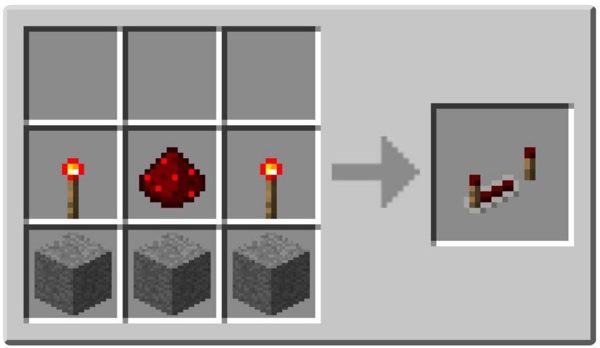 How Does a Redstone Repeater in Minecraft Work?

The Repeater works in 3 Ways the diode, the repeater, and the delay.

1. Diode: The Repeater can only accept the current to flow from the back (input) and restart the current at the front (output). The Input is on the side closest to you when placing the repeater down, and the output is on the opposite side. The adjacent sides of the Repeater will not be affected.

If the Redstone flows into the Repeater’s side or from the front of it, the Redstone Repeaters will not work. The Redstone’s current must flow from the Input to the Output. As demonstrated in the picture below.

3. Delay: The Repeater has the option to delay the flow of the Redstone current by 0.1 seconds, 0.2 seconds,0.3 seconds, and 0.4 seconds. Using multiple Redstone Repeaters is an excellent option to create longer delays. This is usually used for triggering circuits that are not synchronized, such as a Redstone cannon.
An example of this is demonstrated in the picture below. 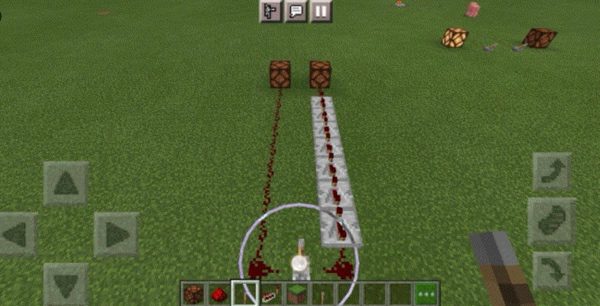 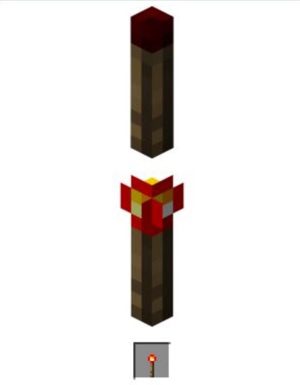 The Torch will also power Redstone items on all 4 sides, such as Pistons. The Redstone Torch can be powered on and off by powering items such as a lever or a button.

Redstone Wire is similar to your home circuit. To make Redstone wire, you can place Redstone Dust on any surface besides Glass. Placing 2 or more Redstone Dust in a connected line will create a “Current” flow when the Redstone wire is made active. Redstone’s current can only flow forwards or at a 90-degree angle, meaning it can not flow diagonally.

You can’t use it vertically to go up a wall but down a single block. The Current can flow backward or forward, but only one way at a time.

To activate the wire’s circuit, you will need to use a tool such as a lever. After connecting the tool, you can click on the lever to activate the wire. If the Redstone is dark red, it will be inactive. If it is bright red, it is active, just like the picture below. 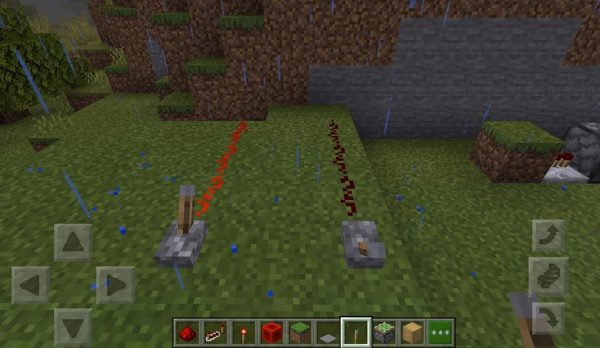 When using a Repeater in a Redstone circuit, you can place any solid block (Not Glass) between the Repeater and the Redstone Wire. The Power will flow through the block in front of the repeater and carry the current to the Redstone Wire. You can place the block on both the input and the output sides of the Repeater, allowing you to use less Redstone dust. Note that the current will not flow through a block in the middle of a circuit but only through the block directly next to the Repeater. This is shown in the images below. 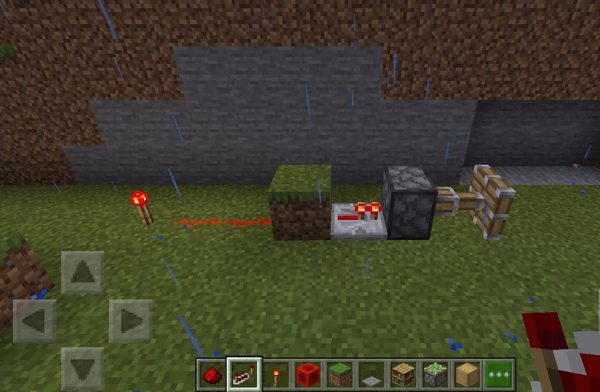 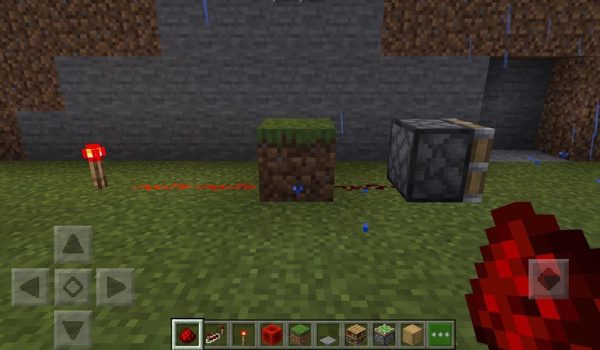 You can place the block between two Redstone Repeaters, and it will still work. This will allow the current to flow from one repeater to the next. 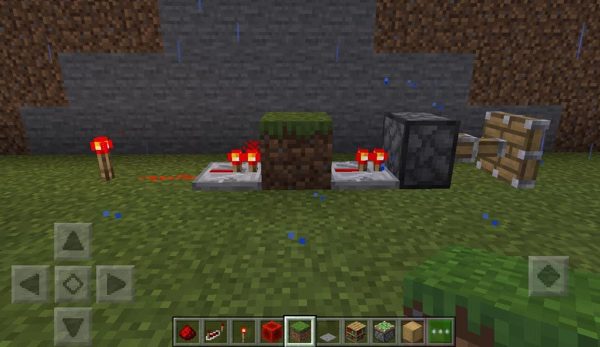 In the same way, adding a block in the middle after a Repeater makes the block a power source. This will allow current to flow in both lateral directions and forward. Here is an example of this in the picture below. Redstone wire can transmit power up to 15 blocks. You can set how long by right-clicking to cycle between 0.1, 0.2, 0.3, or 0.4 seconds. Transparent blocks cannot be powered. Redstone wire also powers the block at the end of the line; however, this block only gets weak power. 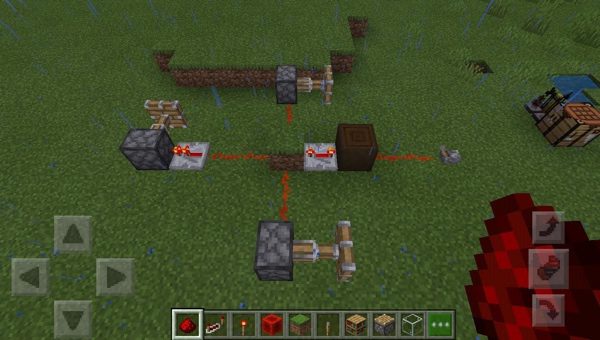 How do you make a 2*2 Redstone door, and how does it work? I will demonstrate and explain this below.

First, you will need to dig into the ground and place the Redstone Dust and the Redstone Torch down, as depicted in the image below. Once completed, cover the floor again. 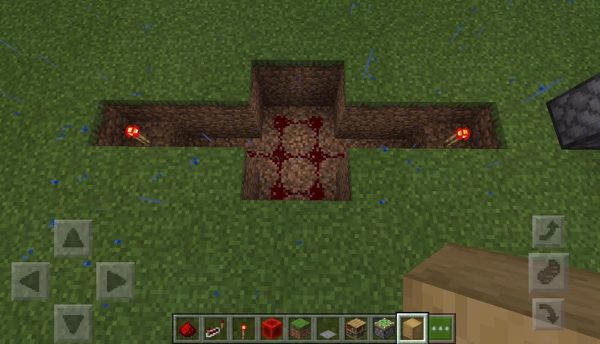 Place a block above the Torches and place Redstone Dust on top. Then attach a Sticky Piston onto this block, pointing it towards the middle of the hole, then add another Sticky Piston above it. Make sure you place it like the picture below shows. 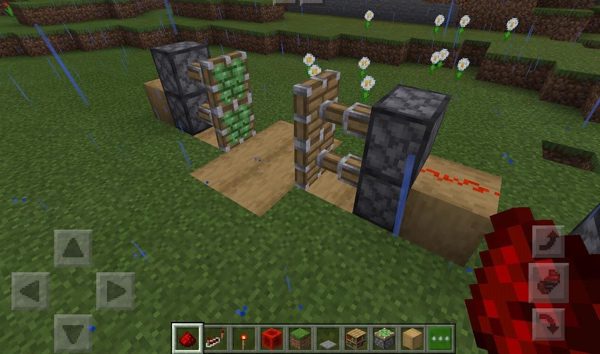 Almost finished! You can then place the 4 “doors” blocks in front of the Sticky Pistons and the 4 pressure plates down in front of the “door” blocks as seen in the picture below. 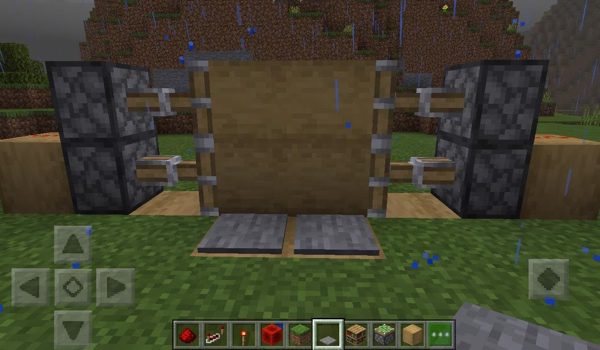 When you walk over the pressure plates, the Sticky Pistons will retract, and you can walk through the now-open door. Once you have walked through the door, the Pistons will push the door closed again. You have now completed the 2*2 Redstone door. 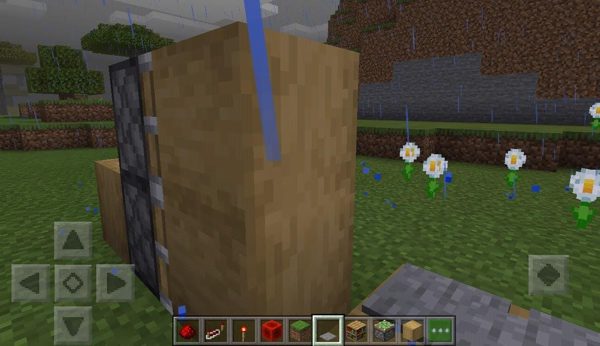 We hope this article can help you with every Redstone Component in Minecraft.

Minecraft is available on the App Store for $6.99 and on Google Play for $7.49. But following the detailed tutorials below, you will have access to Minecraft for free on iPhone and Android.

At this point, we must mention Panda Helper. It is a third-party app store providing the most popular iOS and Android hacked apps & games, including fantastic Game Tools for every need. It provides Minecraft for free download on iPhones, iPad, and Android.

How to Get Minecraft for Free on iPhone?

Before you get Minecraft free download iOS version, you must install Panda Helper on iPhone/iPad. Panda Helper iOS versions include the Free, VIP, and jailbroken versions.

Follow this detailed tutorial to download Minecraft free on your iPhone: How to Get Minecraft for Free on iPhone.

How to Get Minecraft Android for Free?

Before you get Minecraft APK for free, you must install Panda Helper on your Android phone.

Follow this detailed tutorial to download Minecraft free on Android: How to Get Minecraft Android for Free.